How do you intend to use your boat? Do you sail only on calm days with fair weather (Lunch Hook) or are you outfitting for an adventure (Storm) where you might be exposed to hazardous weather at anchor? For example, if you are outfitting a 35 foot boat for you should size the working rode and anchor to safely handle loads up to 1,800lbs if planning a cruising adventure, but the same margin of safety is not necessary if operating day trips from the safety of a marina.

When making sizing recommendations we are generally referring to the needs of a cruising boat spending most of its time on anchor, in doing so we try to envelope high sustained winds (45 kts) and assume poor holding conditions (low viscosity bottoms).  Some may think these recommendations to be too conservative especially when compared to sizing tables from other manufacturers. Companies often make claims of superior anchor efficiency, stating that their small anchor X will outperform a much heavier anchor from their competitors and often use sizing charts as a marketing tool to that end, recommending anchors and anchor systems that are dangerously undersized for their intended use.  Comparing surface area can be a good judge for potential holding capability.  Our anchor sizing recommendations are presented in the table below: 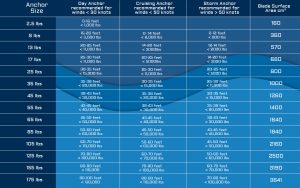 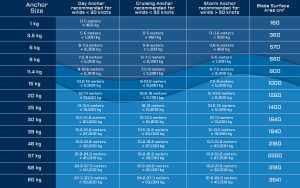